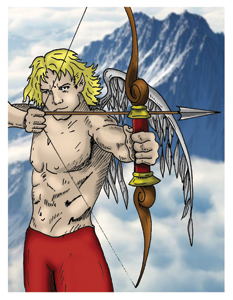 The newest member of Holiday Horror is here to set the record straight, he is not a chubby little baby in a diaper trying to make people fall in love! That’s Cupid! Dark Eros is the Greek god of love and desire. Eros is sick and tired of being confused with his Roman counterpart and has come to NDW to show the world he is not to be taken lightly.

Dark Eros uses his power over lust purely for his own personal gain. Backstage at NDW shows, it is not uncommon to see flocks of women and men lined up to see Eros. He uses his powers over lust to make these people full of desire for him and uses them however he sees fit. This has caught the eye of many in NDW, who see this as a disgusting abuse of power and completely immoral. Dark Eros claims that he has nothing to do with it, that people just love him. He has a bit of a cult following and loves every second of it.

Throughout the years, Dark Eros has gotten himself in plenty of trouble with the use of his powers. Many jealous lovers have made attempts on his life. As a result, his wings are tattered and broken, limiting his flight to only a few feet off the ground. However, being a Greek god has made him quite difficult to kill, or even injure.

Now that Halloween Hank is out of Holiday Horror, this leaves the top singles spot to Dark Eros, who is set to battle the former leader of the team. Many see this as a mismatch, but don’t sell Dark Eros short. He has much to prove and will never back down from a fight!

One person who has found an interest in Dark Eros is Rajah Ring Royalty. Rajah has come to Dark Eros for help in breaking the curse that has turned him into a frog. Eros refuses to help Rajah, but Rajah has been relentless in his pursuit to find true love. Dark Eros just continues to dismiss him, claiming it doesn’t work like that! It appears Dark Eros is just waiting for the offers from Rajah to be more beneficial. Either that, or Dark Eros finds Rajah’s desperation to be entertaining, in his own sick way.