Michelle Mendez is a former minesweeper for the United States Army. She was given the nickname Bomb Chelle by her platoon for two reasons, her expertise in explosives and her striking looks. Bomb Chelle is fearless! She has no problems entering a minefield and disarming bombs to protect her fellow soldiers. On top of her mental bravery, Bomb Chelle is also as tough as they come physically. She won the Army Wrestling Championship competing against men.

When Bob Hagar, who has a special appreciation for the armed forces, reached out to Bomb Chelle to potentially join his Black and Blue Crew, she was very eager to accept the challenge. Bob Hagar paired Bomb Chelle up with fellow servicemen, Jet Black and Navy Blue. She will work as a third member of that tag-team. Whenever the Black and Blue Crew is scheduled for a tag-team match, any combination of the three may compete.

As a singles competitor, Bomb Chelle is set to do battle with fellow newcomer and rival, Cardinal Maximoff of the Knights of the Round Table. With this new rivalry, the Battle of the Sexes that started with Di-Smash and Lambert has now only escalated within these competing factions. Many speculate that with Bomb Chelle’s skill set, she is favored to come out on top in her matches against Cardinal Maximoff. A natural competition between the two females of their respective factions has also begun as Di-Smash and Bomb Chelle with have a side feud with one another.

Bomb Chelle’s in-ring style is quite deceptive. At first sight, you would expect her to be a finesse fighter, but instead, she has a vast arsenal of power moves. Many wrestlers see Bomb Chelle’s good looks and expect her to be just another pretty face. However, this woman has the ability to hurt people and she will! Bomb Chelle is can even end a match abruptly on while on the defensive, with the ability to hit her EXPLOSION finisher out of nowhere! 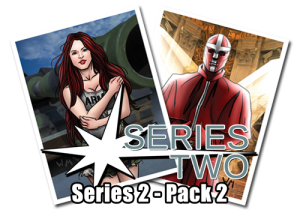